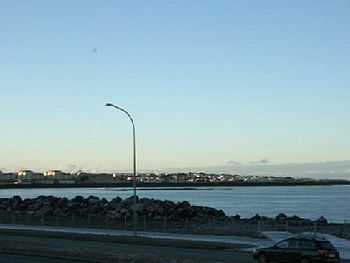 View from balcony from one of the apartments we've rented.

Destination: Reykjavik.
Dates: December 30 - January 13. (We'll be back in time for the Mystery Hunt.)

The glacetarium is designed so that the friends and inhabitants of the Acetarium can gather, relax and enjoy good company, often in geothermal pools, in Iceland. We'll cook meals, present talks, work on projects, and try to enjoy ourselves.

Participants are encouraged to bring their project ideas, books, games, and bottles of fine duty free whiskey. We will be trying to working with a local hacker space to hold a series of talks and presentations -- open to the public! 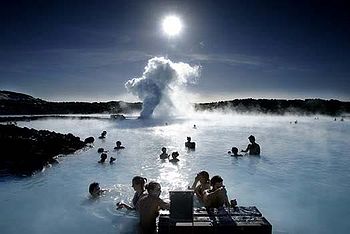 There seem to be two real options for folks flying to Iceland from the United States:

There may be other options from Europe.

To the Flat from the Airport!

This is a google map with both places marked and google recommended driving directions.

Please let us know if you want to come as soon as you find out!

We will divide our rent and food costs by person days at the end of the trip.

Mako and Mika are paying for the two apartments completely up front. We will use the exchange rates at the time of payment to our landlord.

We don't have room for everybody during the whole period of time. This is especially the case before 1/3 when we get the second apartment. For those who are renting rooms the guest house will be in charge of their own payment during that period. You can directly coordinate with our landlord Fridrik Magnusson.

For rent, the current plan is going to be to pool the total cost, split by the number of total person nights, and then charge people by the number of nights they stay. We're basically full. At the current exchange rate, the price will be under USD 22 per person per night.

Additionally, the Guest house will be 25USD/person/night for those who need a place to stay before their houses become available.

We are planning to cook most of our meals together including dinner each night. We plan to buy all our food in Iceland. BONUS is the local discount supermarket. We will keep receipts and split costs similarly to the way we divide costs for rent (see the section on rent above).

There are at least 4 vegans and a large majority of people attending are vegetarian. The current plan is to cook primarily vegan and exclusively vegetarian to simplify things and to keep costs low.

If folks feel a strong desire to cook meat we can try arrange for one kitchen to be meaty.

We have found one landlord (Fridrik Magnusson) with a good deal of space in Reykjavik (Vesturgata Unit 71 and Unit 73). He's trying to give us a good deal and seems pretty flexible. Currently the rundown includes three places:

In both places, the landlord can provide a same day laundry service for an extra fee. Alternatively, you can bring enough clothes or wash by hands.

Please only add your name here after you have purchased your tickets.

We are reserving one apartment place that can hold a maximum 8 people from December 30th through January 13th. The house has 2 bedrooms and the landlord will be put 2 more mattresses in the bigger bedroom. There is a sofa bed in the living for 2 people as well. Ideally, we'll get two places and sleep 6 or 7 in this apartment.

There is an apartment next door from the same landlord that can hold 10 people that will be available from the 3rd of January through the 13th. As soon as we get 4-5 people who've signed up for this, we'll put a deposit down to reserve the space for the whole period. Please sign up quickly so we can make sure we get it before someone else does!

Since the house is not available until 1/3, the owner said that we can stay at his other guest house (20-25mins away) until the 3rd for the same price. Let Mika or Mako know if you want to rent the place. Please add your name to the list in the next box if you'll need this.

Please only add your name here after you have purchased your tickets.

If you need a room in the guest house, put requests down here. We'll try to aggregate these and get these to the landlord and will let folks know. We're currently under the impression that we will have plenty of space. The cost of the guest house will be 25USD/person/night:

There are hostels and are other apartments for people that want to come for period from December 30 through January 1st. Folks can expect to pay between US $20-35 per night in shared apartment or hostel. Mako and Mika will not arrange these other accommodation though. Obviously, the bigger the place, the cheaper the per-person/per-night cost.

Some suggested items to bring for the trip:

Things that would make sense for you to bring your own of:

Stuff that we'd want as a group, but only one or two people need to bring:

Molly de Blanc will be the program chair and will be coordinating and scheduling talks and helping select among the suggestions here.

Retrieved from "https://wiki.mako.cc/index.php?title=Glacetarium_2011&oldid=2571"
This page was last edited on 30 October 2013, at 21:19.
Content is available under Attribution-Share Alike 3.0 Unported unless otherwise noted.
Privacy policy
About WikiDotMako
Disclaimers