Difference between revisions of "TheSetup Changelog"

In April 11, 2012, I did an interview with The Setup which is online at http://benjamin.mako.hill.usesthis.com/. Over time, my technology use changes but I don't get to update the website very often. As a result, I've tried to keep a changelog here where I update lists of major pieces of software that I adopt. Between that interview and this changelog, you should be able to get a pretty comprehensive idea of what I'm using.

I often try out and evaluate new technologies but usually reject them. I'm adding things to this list only when I've been using the technology for long enough that I'm comfortable calling it part of my setup. So if someone is listed as "December 2015" (for example) it's very likely that I've been using and experimenting with it for months, or even years, already. 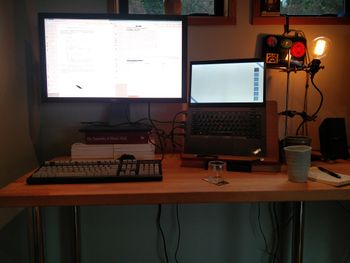 Surface of standing desk with Jasmine Bookstand holding up the laptop so that it's a more ergonomic height.

If you've got any questions about my setup or suggestions, don't hesitate to leave a public comment on my blog or email me at mako@atdot.cc.

Retrieved from "https://wiki.mako.cc/index.php?title=TheSetup_Changelog&oldid=53710"
This page was last edited on 6 September 2018, at 01:02.
Content is available under Attribution-Share Alike 3.0 Unported unless otherwise noted.
Privacy policy
About WikiDotMako
Disclaimers