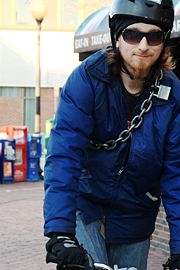 The Acetarium now has an Xtracycle! The Xtracycle is like a hingeless trailer for a bicycle but our model -- called the Free Radical -- is more like an extension for a normal bicycle which moves the wheel back by about half a meter and gives you loads of places to plug in racks and bags. All this extra space can be used for huge side bags for transporting all sorts of things and there's a big skate-board style board top for passengers to sit on. The inventor calls these converted bikes Sports Utility Bicycles (SUBs).

We converted ours on the long weekend of February 6-8 2009 and learned a lot about Bike maintenance in the process. We used an old Concord Pacer road bike. The bike was brought back to life by Bikes not Bombs. We bought it off Joris van Hoboken when he left Cambridge to go back to the Netherlands.

Here are some of the first things we've transported on ours:

Here is our Xtracycle, loaded up and leaning against a tree. You can't see, but there are probably 15-20kg of groceries from the Haymarket loaded up into the cavernous sidebags: 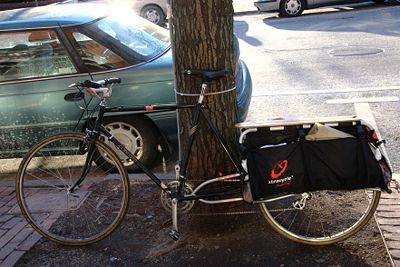 Here's a shot from the back that gives you more an idea of what's in there: 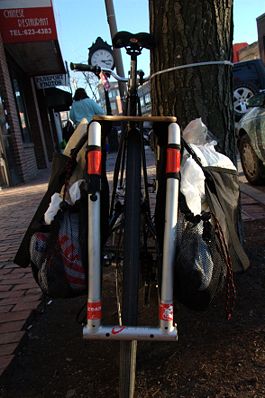 Here's a picture of Mako getting ready to ride it. 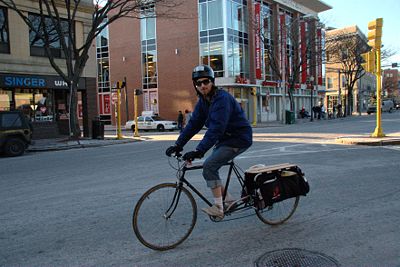 Here's another of Mako starting to pull away: 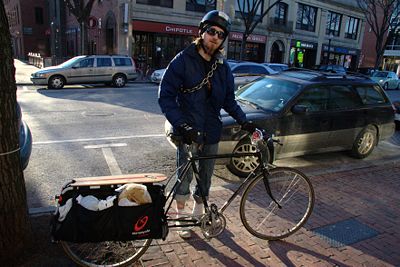 The Xtracycle doesn't only transport groceries, it transports people (1 passenger comfortably and 2 if need be). In this picture Mika getting ready for a short ride around the block: 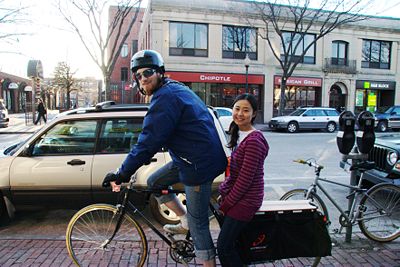 Finally, here is the contents of what we had picked up all unloaded onto our kitchen table (Mika has annotated the contents in MS Comic Sans ): 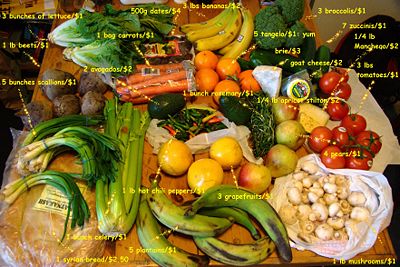 Retrieved from "https://wiki.mako.cc/index.php?title=Xtracycle&oldid=3143"
This page was last edited on 11 May 2011, at 04:09.
Content is available under Attribution-Share Alike 3.0 Unported unless otherwise noted.
Privacy policy
About WikiDotMako
Disclaimers